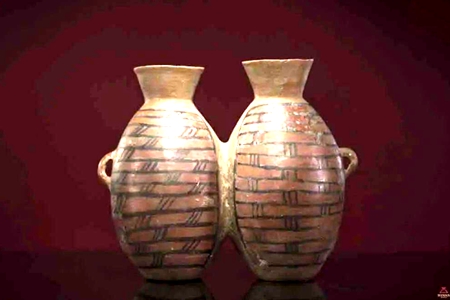 At Henan Museum, there is a piece of priceless treasure - “Painted Pottery Twin Pot”. It is unearthed from Dahe Village Ruins, and it is one-of-a-kind. Like what you think, it is the Painted Pottery Twin Pot shown by the picture in Yangshao Culture chapter in middle school history textbook. It is widely believed in the industry that the Painted Pottery Twin Pot is a holy ceremonial article, a sacrificial vessel used when a clan allies itself with another clan or when there are large-scale activities and a drinking vessel for drinking together, representing peace, friendship, mutual respect and mutual attachment.

In consideration of being approximate to age and excavation site, some experts believe that when Yandi (Yan Emperor) allied himself with Huangdi (Huang Emperor), they used the Painted Pottery Twin Pot for drinking together, to take an oath and be reconciled with each other, which is the earliest deduction of the statement that “drinking the same pot of wine represents we are friends sharing both life and death”. There is another relatively interesting deduction, and specific content is as follows: during Yangshao Culture period, people at that time were going through the transition from incestuous marriage, group marriage and dual marriage to monogamy, so it is speculated that the excavation site is the residence of a primitive couple. According to this statement, maybe the Painted Pottery Twin Pot is the origin of “drinking cross-cupped wine” in today’s society.

At Dahe Village Ruins Museum, there is a ruins hall which protects the ruins of the foundations of a house. The aforementioned Painted Pottery Twin Pot is unearthed here. This heap of ruins of the foundations of a prehistoric house still retains a complete layout and walls with a height of more than 1 meter now, which is amazing. Its walls are constructed through the construction method of “wooden framework complete modeling”. In addition, its walls and floor are baked into brick-red with fire. This kind of dual-side slope-style terrace building lays the basic style of traditional dwellings in northern China, being a milestone in the history of Chinese architecture.

A light rain goes on and on. In the drizzle, Zhengzhou is misty and rainy likes a poetic painting.

It is just the time when spring comes into the Year of the Ox, and when a timely snow promises a good harvest.

Among the temples in Songshan of Zhengzhou, Henan Province, Huishan Temple is the least conspicuous. It hides in the valley under the green peaks of Taishi Mountain, standing in the wind and rain for thousands of years, and elegantly portraying the Buddhi

No pains, no gains，please start the New Year with diligence